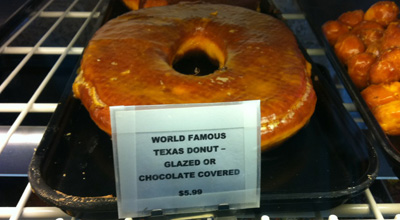 I have a new idea for fixing health care in the US, and <shocker> it’s not socialized medicine!  In fact, it has a lot to do with something we all love and is totally unhealthy for us: As we look for solutions to the Medicare crisis in America, most politicians completely oppose reforming the current Medicare system.  Especially during election time, the first words out of any politician’s mouth are “for current seniors, there will be no change in benefits.”  If this is truly a fiscal crisis (as national debt hawks purport), then this approach does nothing to solve the near term problem.  Medicare costs will continue to rise 6-10% per year until they bankrupt our entire economic system.

But why are medical costs rising exponentially when health care itself only gets slightly better each year?  It’s because current insurance programs, Medicare included (and as the largest), obfuscate the true economic cost of health care.  Providers are raising their prices and insurers (including Medicare) are increasing payments year after year.  This grows unbounded because there is no consumer visibility, and no consumer pressure to lower costs.  When you need to go to the hospital, you don’t shop around for it, you go to the nearest ER or the facility your physician practices at and your insurance covers.

And here’s my new, revolutionary plan to fix this: create a new, better donut hole!

What do I mean by creating a donut hole?

Remember all that chatter about “closing the donut hole” in Medicare Part D?  Put simply, in the initial Medicare Part D, the cost of the first $2900 of prescription medications were paid for by Medicare.  Once the total cost of your annual prescriptions passed $2900, you paid 100% of the cost of the drugs until you reached $4900, at which time Medicare once again would cover your costs.  That gap in coverage was referred to as the “donut hole.”

I’m thinking we need a HUGE new donut hole in Medicare – TOMORROW!  And the donut hole should be set up something like this:

For seniors reporting income of some number (let’s say $75,000 or less/year), their Medicare remains unchanged.  In fact, their Medicare benefits increase the less money they make, such that seniors living exclusively on Social Security have full, 100% coverage.

For seniors reporting medical expenses of OVER $75,000/year, every dollar over that amount is similarly 100% paid for by Medicare.

For seniors with healthy retirement incomes (let’s say above $75,000/yr) Medicare is phased out and you have to pay every dollar of your own health care up to some out-of-pocket maximum.  (maybe, to keep it simple, let’s say over $75,000 – the key is to cover catastrophic illness and hospitalization, not every trip to the primary care physician and to the pharmacy).

This new, educated, well-connected, wealthy class of seniors who are now suddenly responsible for paying for their own health care will  begin to actively work to reduce their medical costs!  They will shop around for care, carefully plan care costs where possible, and they will drive down the cost of the whole system by applying market forces.

This plan, if you read it carefully, has several features:

Yes, maybe they’ll have to take fewer cruises to the Galapagos Islands, but hey – they were the ones who created this mess and I don’t see why I should be the one to have to pay for it when a good number of them have plenty of resources to pay for it by themselves.  🙂