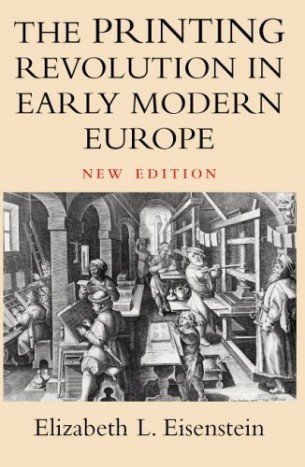 For me, the focus of Eisenstein’s book focused on the cultural significance the printing press had on early European culture.  Specifically, one of the things I found most fascinating was her attempt to put the reader into the culture of the day, attempting to recreate or decode some of the attributes of that society and their reactions to the creation of this new invention and the movement from script to print.

As I read part one, the cultural references constantly drew my mind to a comparison with the technology industry of today.  I got pretty excited about writing this blog about the comparisons between this period in Europe and the past 20-40 years here in North America.  Then, by the time I got to the afterword, I was pretty disappointed that I wasn’t the only one with this comparative thought:

The cluster of printing houses in Venice is reminiscent of what happened to “Silicon Valley” — not least because so many “startups” (like recent “dot-coms”) rapidly went bankrupt and closed down.

I guess I’m not the only one to have drawn this distinction, but I did pull out a few interesting references to support my claim.

First, there is some parallel lines in the technology itself.  Just as printing increased the ability to retain data in a society through replication and sheer quantity (as opposed to using a higher quality or longer lasting data recording technique), the information age also relies heavily on data replication to ensure archival.  Technologies like RAID have made fallible, fragile electronic media (hard disks) less of an issue in solving the local archival issue.  More recently, data storage in the cloud (which sounds nebulous, but quickly becomes very concrete when we consider that people with a hosted (gmail, yahoo, etc) email account stores all of their email communication ‘in the cloud’) has increased our footprint and the potential longevity of our digital communication.

This naturally extends to txts, tweets, status updates, blogs, etc.  The Internet features many complex caching systems, and the open web is notoriously copied, recopied, and saved all over itself.  Sites like WayBackMachine show us how even websites have been routinely captured, though this is becoming harder and harder to do as the browser experience turns more toward interactivity and rich media experience rather than static information presentation.

But, going back to culture, Eisenstein painted a very interesting picture of the landscape of the 15th century, in discussing the implications of having this new printing industry cropping up all over Europe, and the people who saw the potential of it.  As I read page 28, I couldn’t help but think of the comparisons with today’s Internet entrepreneurs, many of whose operations reflect this description:

… the master printer himself bridged many worlds.  He was responsible for obtaining money, supplies, and labor, while developing complex production schedules, coping with strikes, trying to estimate book markets, and lining up learned assistants.  … In those places where his enterprise prospered and he achieved a position of influence with fellow townsmen, his workshop became a veritble cultural center attracting local literati and celebrated figures.

The printers became a driving force as they attempted to crack the new, untested market for book production and sales.  As Eisenstein pointed out in the afterward, these printers probably rose and fell as quickly as many of the small ‘dot-com’ companies of the early 2000’s.  The successful, however, ascended to celebrity status (page 33), just as Bill Gates, Steve Jobs, Larry Page, Sergei Brin, Mark Zuckerberg and others.

The printing press created the notion that now something is declared, it would hold government to that declaration.  We see that happening even today as every initiative coming from the White House seems to come with a new .gov website promising full disclosure of the progress of the program.  While the key feature of this initiative is more transparency, it also becomes a declaration of success of failure that is quickly consumed and replicated across digital media.

One final issue I wanted to touch on was of distortion.  Eisenstein brought to my attention something that makes perfect sense, but which I had not thought of before.  Bible texts are believed to have undergone transformation and change through the scribal period.  Whether these were purposeful changes or simply human error, Bible scholars often place the blame of any loss in biblical fidelity on the scribes who copied and compiled it throughout the years.  Eisenstein points out, however, that the early printing press had just as much (if not more) to do with distortion, as it magnified the mistakes made by the still-new technology as it passed from copyist to copyist.  This is most interesting to me because we tend to look at the printing press as the technological salvation of inaccuracy, when actually it holds the power of promulgating, more quickly and more widely, inaccuracies.  Because remember — if it’s in print, it must be true.