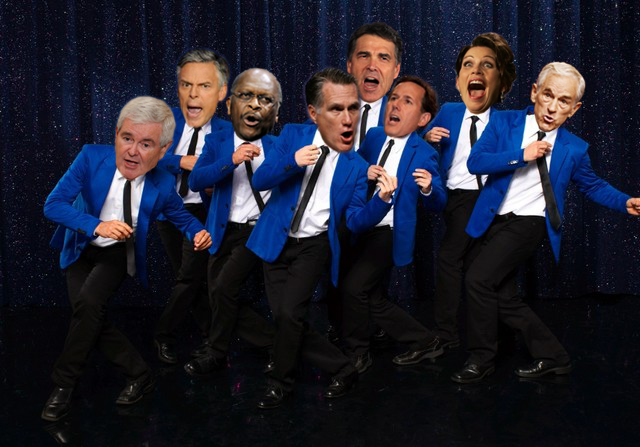 Last night’s debate was enlightening.  Everyone’s campaign got the memo this week, with Herman Cain’s rise in the polls, that the electorate is very volatile right now, and that this debate would matter.  So everyone came out to try and make an impact.  Most of them just fell all over their own faces trying to do so.

Here’s my analysis of this week’s candidates:

Still in the lead, still making all the right decisions, and still too good to be true for the party is Mitt Romney.  He had a very refreshing response when responding when religion was brought up, and handled it far better than he ever has to date, though in my opinion he went too far in patting Gov Perry on the shoulder telling him his lukewarm apology for Jefferds remarks was “OK”.  I’m not sure if it made him look incredibly magnanimous (almost to the point of push-over) or made him look like he was in too much of a hurry to let Perry off the hook and get back to the economy.  Other than that, solid performance by Romney, and I was particularly impressed that he won every shouting match with another candidate trying to horn in on his reponse time.  I didn’t think Mitt had it in him.

As this week’s insurgent, Herman Cain got much of the focus with everyone decimating his 9-9-9 plan.  I really don’t like it either for all of the reasons that Stallion Cornell outlined yesterday – but mostly because it would be a huge tax increase for me as a citizen, a consumer, and a micro-business owner.  I’m just not sure where he gets off by saying we should look at his people’s scoring and his data.  I went to his website and the data is SKETCHY!  The truth is that the “fair” tax is a huge tax break for the wealthy and a huge tax increase on the poor and middle class.  Period.  End of sentence.

Michelle Bachmann’s best moment was when she trumped everyone else’s fence proposal by pointing out that her fence would be a double fence with a security zone in between.  I thought she was going to go one step further and explain how the security zone would be constantly patrolled by the 82nd airborne.  Hallelujah border security gods!

Sadly, Rick Perry was the only one who made a lick of sense about the border, denying the absurd idea that we need a fence or that a fence would deter illegal immigration.  I say sadly, because he was a hot mess the rest of the night.  He even merited a boo from the audience when he repeatedly called Romney a hypocrite for employing a lawn care company who hired illegals.  He’s trying harder, but not really getting better results.  I’m not sure if it’s because he’s that stupid or because he is surrounded with people who are that stupid.  I’m thinking it’s a bit of both.

Newt Gingrich continues to come out with reasonable ideas – like calling the super committee a stupid idea – but his time is sadly past.  He still subscribes to Reagan-style Republicanism that most of the candidates have abandoned for Tea Party style Republicanism.  (Clearly Reagan’s 11th commandment “Thou shalt not speak ill of another Republican” was thrown out the window last night)  Newt shows he has the even-keeled-ness to be a good party mover and shaker again, but I dont’ know anyone who really wants him to be their President.

When it comes to talking about things no one wants to talk about, I give the victory to Rick Santorum.  He has found a way to make himself the ‘values’ candidate for the approximately 1% of voters who care about social issues right now.  His most interesting allegation was against Ron Paul, asserting that the family was the center of our society rather than the individual, to which Paul replied something like, “I’ve given birth to thousands of babies and they call come one at a time.”  To which everyone rolled their eyes.   You can always count on Paul to say something completely sensible but that you completely disagree with the more you think about it.

Jon Huntsman did what no GOP candidate would, in their right mind, do at this point in their race: decline to be on TV.  I suppose he thought the high school cafeteria in New Hampshire would be more integral to his presidential bid; and he might be right.  If his strategy is to focus on New Hampshire, threaten to boycott any caucus that occurs before the NH primary, and try to come in 2nd or 3rd in New Hampshire, it’s the right strategy.  It’s really all he has left.  He’s gotta be running low on money and low on will to try and make himself look appealing as a moderate in this crowd of Tea Party panderers.  I know I would be.

After the debate, I watched NBC’s The Sing Off, which I had recorded from the day before.  and pictured all the candidates in an acapella group together…