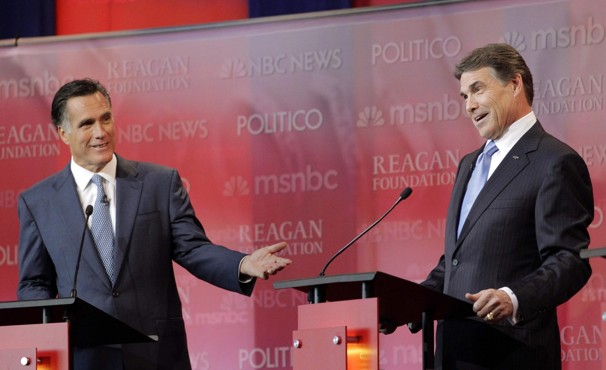 It was a very interesting press weekend for Mitt.  First, the NY Times wrote a very interesting (and in my opinion, fair) article on Mitt’s various responsibilities in the LDS Church over the last few decades.  Non-Mormons (and the electorate at large) has no idea that while also building and running a super-successful business, Mitt was also spending whatever “free” time he had overseeing and running multiple congregations of LDS adherents. As I suspected, the stories in this article represent both sides – both the joy and the difficulty –  of working as an ecclesiastical leader.  The young man’s story of wise counsel setting his life on a better path is just one of thousands that likely occured during Mitt’s tenure as Bishop and Stake President.  Those are the easy ones to talk about.  One the other hand, I would advise the world to reserve judgement about Mitt’s counsel to families making difficult decisions.  Sometimes an ecclesiastical leader will feel moved to counsel two different people about the same issue two different ways.  Though Bishops are instructed not to specifically counsel couples for or against divorce as a resolution to their marital difficulties, I’ve known instances where the leader was relieved by a divorce and instances where they were saddened by a divorce.  Context makes a world of difference, and no newspaper article could ever provide the full context for any such exchange between priest and congregant.

Also, my friend McKay Coppins posted an interesting (but unsurprising) article about leaked emails from the Perry campaign’s religious advisors have reacted and plotted in regards to Mitt’s religion, and their hopes of sinking his candidacy through its marginalization. It appears that the inseparable siamese twins, religion and politics, are just heating up for the GOP primary.

Do you think it gets worse before it gets better?

Any of my non-LDS readers have a problem with Mitt’s religion or past as a lay leader of the religion?