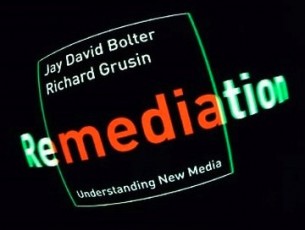 For this week’s reading (Bolter and Gruesin – “Remediation), I had to keep referring to the title page over and over thinking to myself, “What is the date this was written again?”

As I read their theories and examples, I couldn’t help but feeling that, technologically, were very cutting edge for 1999, and it also surprised me to think of how much our society has changed in just 10 short years.  I’m going to date myself here, but I graduated from High School the year this book was copyrighted.  In a lot of ways the digital age was only beginning.  Digital photography was just breaking (I bought my first digital camera in 1999, a Kodak 1MP camera for $599 – one of my first purchases off of this new really cool new site called eBay…), the digital cell phone would make mobile phones less expensive and more popular (especially with the draw of free long distance and unlimited calling during nights and weekends), and internet video had not yet really begun (though I did download a postage stamp sized trailer for Star Wars: Episode I from their website – which took 2 or 3 days on a 56k modem).  *Sigh*  Those were the days!

I walk back through the time because I think Bolter and Gruesin’s theories, while they weren’t really predictive of or dependent on any specific technology that would arise in the next decade, were dependent on at least the prevailing winds they saw in 1999 continuing into the next decade – that the digital (and specifically digital media) would pervade our lives, and that media companies and content creators would have to invent and reinvent their content over and over again to put it in front of our faces as much as possible.  Looking back over the last decade, I would guess that Gruesin and Bolter would be pretty happy with how their theories played out as the technology developed.

I’ll provide an update and an accolade to the reading.

The update is around mobility.

As I read through the first theory chapters, I felt like the authors didn’t foresee or allow for today’s reality of media mobility.  I kept asking myself – “how mobility affect immediacy?  Does it push you into hypermediacy when I’m able to view the same content on any device at any time anywhere?”  Certainly, remediation itself, the concept of “repurposing” or reusing bits of media, plays well into the mobility story.  You are, in fact, viewing the same media that has been reformatted for whatever device you are viewing it on.  ABCNews.com or NPR.org are great examples.  If I view their website, I get a vastly different viewing experience than I get on my iPad, which also differs from my iPhone.  Though it’s the same stories, photos, video and audio, the presentation layer is extremely different on each device, adapted to the strengths (and sadly also the historical use, cultural expectations, and technical lowest common denominator) of that media.

The accolade is for Part III on the mediated (and remediated) self.

I think Grusin and Bolter really hit the nail on the head in a way that couldn’t have been predicted in 1999.  The way that your online persona is managed in today’s Internet has exploded since the late 90’s (the same parent that warned me to be careful in putting a family picture on my angelfire website in 1999 now has his own facebook profile), yet they foresaw the potential in the Internet for a person to constantly remediate their own self.

In the 90’s the concept of the remediated self already existed as evidenced by films like Jerry Maguire which highlighted for pop culture the way VIPs would manage their image in the old media – however – today’s reality is that everyone is their own online image consultant!

This networked self is constantly making and breaking connections, declaring allegiances and interests and then renoucing them — participating in a video conference while sorting through email or word processing at the same time.  (Bolter and Gruesin, 232)

I don’t know how much more accurately one could have predicted social networking in 1999.  The concept the authors put forward of the remediated self, a self that is embodied in a web browser, an email client, a video chat, a YouTube video, or a Facebook profile, is the essence of today’s Internet experience.

When talking in terms of the “virtual self” and the “networked self”, the authors put as much weight on the immediacy that might be provided by a virtual reality environment as they do the networked environment.  However, today’s society has decidedly preferred the networked self, and though the authors assert that they can live in harmony with one another (Bolter and Grusein, 233), practicality and popularity seem to be telling us otherwise.

The authors are right to say that the network self has developed into a hypermediated experience.  I would go so far as to say it is an extremely hypermediated experience.  We take our online self and surround it with photos (usually heavily doctored), video, banners, text, applications, and friends.  Our networked self is then defined by what we surround ourselves with, whether or not it’s actually true in reality.  The fully immersive environment has yet to really take hold of the public’s imagination, yet this hypermeidated version of self that can be easily created online is quite popular.